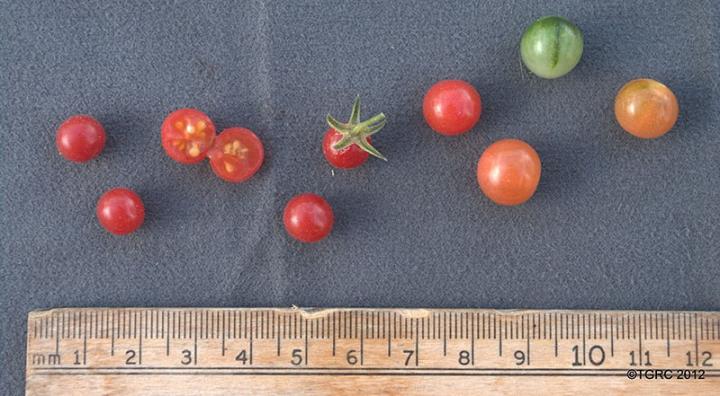 The fruits of Solanum pimpinellifolium, the wild ancestor of modern cultivated tomatoes, are about the size of blueberries.
Scott Peacock and the C.M. Rick Tomato Genetics Resource Center

Although today's tomatoes are larger and easier to farm compared with their wild ancestor, they also are less resistant to disease and environmental stresses like drought and salty soil.

Researchers from Boyce Thompson Institute (BTI), led by Zhangjun Fei, created a high-quality reference genome for S. pimpinellifolium and discovered sections of the genome that underlie fruit flavor, size and ripening, stress tolerance, and disease resistance. The results were published in Nature Communications on Nov. 16.

"This reference genome will allow researchers and plant breeders to improve traits like fruit quality and stress tolerance in the tomato," said Fei, "for example, by helping them discover new genes in the modern tomato as well as by reintroducing genes from S. pimpinellifolium that were lost over time as S. lycopersicum was domesticated."

Fei is a BTI faculty member and co-corresponding author on the paper, as well as an adjunct professor in Cornell University's School of Integrative Plant Science (SIPS).

Although other groups had previously sequenced S. pimpinellifolium, Fei said this reference genome is more complete and accurate, thanks in part to cutting-edge sequencing technologies that are able to read very long pieces of DNA.

"Older sequencing technologies that read short pieces of DNA can identify mutations at the single-base level," said Shan Wu, a postdoctoral scientist in Fei's lab and co-corresponding author on the paper. "But they aren't good at finding structural variants, like insertions, deletions, inversions or duplications of large chunks of DNA."

"Many known traits of the tomato are caused by structural variants, so that is why we focused on them," Fei said. "Structural variants also are understudied because they are more difficult to identify."

Comparing to other tomato genomes

Fei's group compared their S. pimpinellifolium reference genome to that of the cultivated tomato, called Heinz 1706, and found more than 92,000 structural variants.

The researchers then combed the tomato pan-genome, a database with the genomes of more than 725 cultivated and closely related wild tomatoes, and discovered structural variants related to many important traits. For example, the modern cultivated tomato has some genomic deletions that reduce their levels of lycopene, a red pigment with nutritional value, and an insertion that reduces their sucrose content. 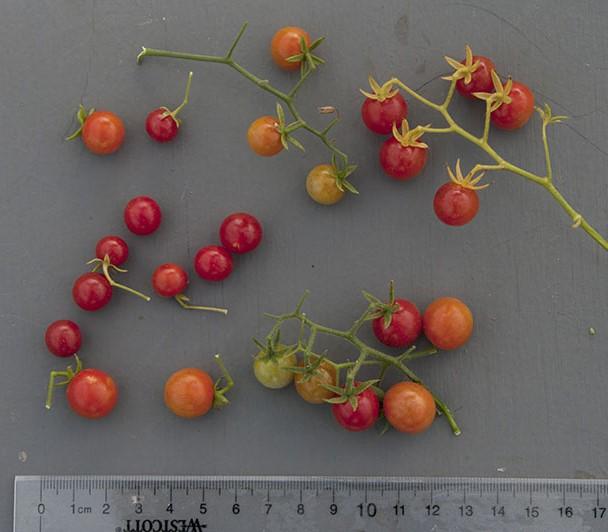 Jim Giovannoni, BTI faculty member and co-author of the study, notes that many consumers are disappointed in the quality and flavor of modern production tomatoes because past breeding efforts ignored those traits in favor of performance and yield.

"Identification of the additional genetic diversity captured in the S. pimpinellifolium genome provides breeders with opportunities to bring some of these important features back to store-bought tomatoes," said Giovannoni, who is also an adjunct professor in SIPS and a scientist with the US Department of Agriculture's Agricultural Research Service.

The researchers found many other structural variants that could be of interest to plant breeders, including variants in numerous disease-resistance genes and in genes involved in fruit size, ripening, hormonal regulation, metabolism, and the development of flowers, seeds, and leaves.

The group also found structural variants associated with regulating the expression of genes involved in the biosynthesis of lipids in fruit skin, which could help improve the fruit's post-harvest performance.

"So much genetic diversity was lost during tomato domestication," Fei said. "These data could help bring some of that diversity back and result in tomatoes that taste better, are more nutritious and more resilient."

- This press release was originally published on the BTI website. It has been edited for style and length