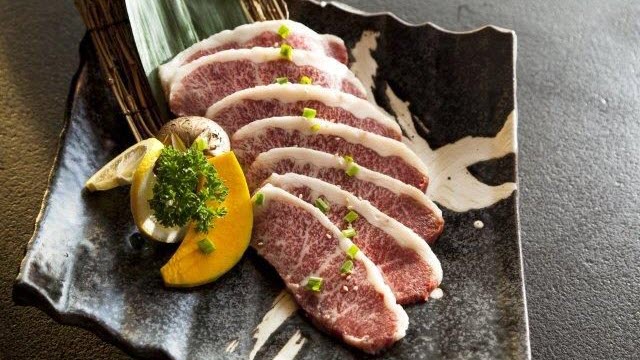 Key odorants detected in Japanese Wagyu beef, one of the world’s most sought-after meats, could help explain its delectable flavor and aroma.Photo Credit: Ben Bryant/Shutterstock.com

Renowned for its soft texture and characteristic flavor, Wagyu beef—often referred to as Kobe beef in the U.S.—has become one of the world’s most sought-after meats. Now in a study appearing in the Journal of Agricultural and Food Chemistry, scientists report that they have detected several key odorants that contribute to the delicacy’s alluring aroma.

Considered by some to be the champagne or caviar of beef, Waygu is one of the rarest and most expensive meats in the world. It comes from Japanese Black cattle—which accounts for 95 percent of Wagyu—and three other species raised in Japan. The meat’s distinctive marbling, juiciness, and succulent taste are enhanced by its sweet aroma, known as “wagyuko,” that has been compared to coconut or fruit. In recent years, scientists have been trying to nail down what makes Wagyu aroma distinctive from other types of beef. In one study, researchers found that one particular compound appeared to have an important influence on the meat’s aroma. But the samples used in that experiment were not cooked at the optimal temperature. To get a better sense of which odorants are responsible for Wagyu’s aroma, Satsuki Inagaki and colleagues decided to try a different approach.

The researchers conducted an aroma extraction dilution analysis of Matsusaka-beef (a kind of Wagyu ribeye) and grass-fed Australia beef (loin). The team heated the samples to about 175 degrees Fahrenheit to simulate optimal cooking conditions. Using gas chromatography techniques, the research team detected 10 newly identified compounds in the Wagyu beef aroma, including one previously associated with cooked chicken that had an egg-white odor. Several Wagyu compounds were also found in the Australian beef aroma.  However, the researchers say they likely don’t smell alike because of the differing amounts of these constituents in the meats. The most potent odorant of Wagyu beef was a compound known to be derived from fatty acids present in the meat. The researchers say that this study not only clarifies which compounds are the main odorants in cooked Wagyu, it also helps confirm that particular types and amounts of unsaturated fatty acids in the beef play a key part in this aromatic process.

Note: ACS does not conduct research, but publishes and publicizes peer-reviewed scientific studies.