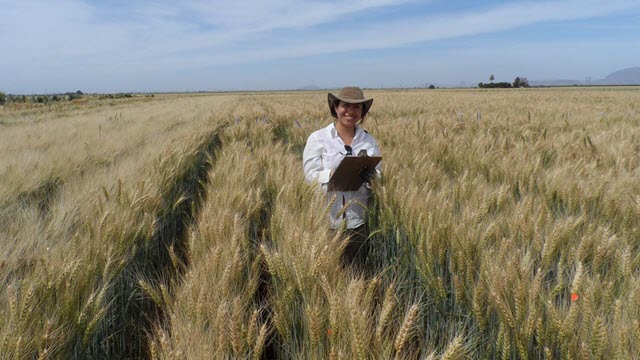 Scientists have put elite wheat varieties through a sort of "Photosynthesis Olympics" to find which varieties have the best performing photosynthesis. This could ultimately help grain growers to get more yield for less inputs in the farm.

"In this study we surveyed diverse high-performing wheat varieties to see if their differences in photosynthetic performance were due to their genetic makeup or to the different environments where they were grown," said lead researcher Dr. Viridiana Silva-Perez from the ARC Centre of Excellence for Translational Photosynthesis (CoETP).

The scientists found that the best performing varieties were more than 30 percent better than the worst performing ones and up to 90 percent of the differences were due to their genes and not to the environment they grew in.

"We focused on traits related to photosynthesis and found that some traits behaved similarly in different environments. This is useful for breeders, because it is evidence of the huge potential that photosynthesis improvement could have on yield, a potential that hasn't been exploited until now," says Dr. Silva-Perez.

During the study, published recently in the Journal of Experimental Botany, the scientists worked in Australia and Mexico, taking painstaking measurements in the field and inside glasshouses.

"The results that we obtained from our "Photosynthesis Olympics", as we like to call them, are very exciting because we have demonstrated that there is scope to make plants more efficient, even for varieties working in the best conditions possible, such as with limited water and fertilizer restrictions. This means for example, that breeders have the potential to get more yield from a plant with the same amount of nitrogen applied," says CoETP director and professor Robert Furbank, one of the authors of this study.

Photosynthesis—the process by which plants convert sunlight, water, and CO2 into organic matter—is a very complex process involving traits at different levels, from the molecular level, such as content of the main photosynthetic enzyme Rubisco, to the leaf, such as nitrogen content in the leaf and then to the whole canopy level.

"This work is an important result for the CoETP, which aims to improve the process of photosynthesis to increase the production of major food crops such as wheat, rice, and sorghum. There is a huge amount of collaboration, both institutional and interdisciplinary, that needs to take place to achieve this type of research. Without the invaluable cooperation between statisticians, plant breeders, molecular scientists, and plant physiologists, we would have never achieved these results," says co-author Tony Condon from CSIRO and the CoETP.