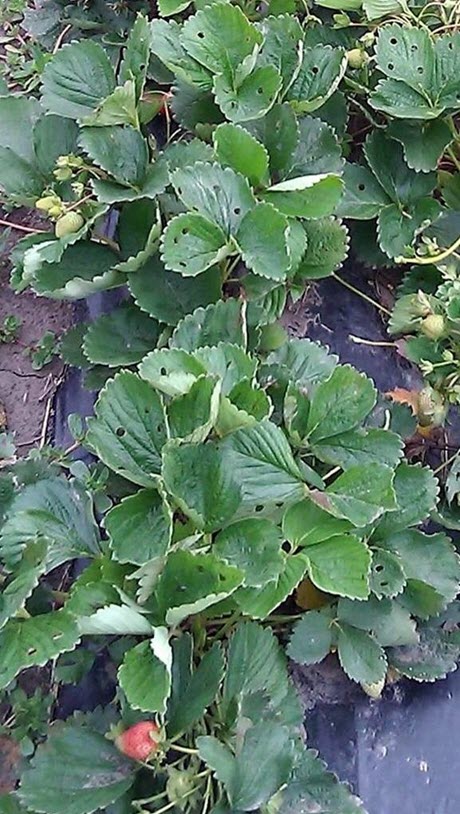 Picture of strawberry wounding field experiment with 50 perforations per plant (W50).Credit: Luis Cisneros-ZevallosTexas A&M AgriLife Research scientists found benefits of insect leaf-wounding in fruit and vegetable production. Stress responses created in the fruits and vegetables initiated an increase in antioxidant compounds prior to harvest, making them healthier for human consumption.

"Many studies in the past supported this idea, but many others showed no differences," said Luis Cisneros-Zevallos, PhD, AgriLife Research horticulture and food scientist in College Station and principal investigator for a study addressing this controversy. "In our study we proved that wounding leaves in plants like those caused by insects produce healthier organic fruit."

"We conducted studies using strawberries as a crop model and applied various levels of wounding to the leaves a few days before harvesting the fruit. We found how several genes associated with sugar translocation and phenolic compound biosynthesis were overexpressed in the distant strawberry fruit," said Facundo Ibanez, PhD, an investigator for the project associated with the Instituto Nacional de Investigacion Agropecuaria, Uruguay.

All plants have the ability to respond to the environment by activating the secondary metabolism as part of a defense mechanism or as part of an adaptation process. It also activates the primary metabolism, which will move the carbon source needed to produce those antioxidant compounds, explained Cisneros-Zevallos.

"There was the existing idea proposed by others that insects present in the field in organic farming could cause a stress response in the plant and increase antioxidant compounds," said Cisneros-Zevallos. "However, this hypothesis or concept was never tested until now, where we mimicked the damage caused by insects."

Ibanez said the study emphasized fresh produce as an excellent source of health-promoting compounds and that perhaps insects in some way can be allies to achieve even healthier produce.

"Healthier grown produce for the food industry can be a driving force for large-scale production and an attractive investment to relevant stakeholders," he said. 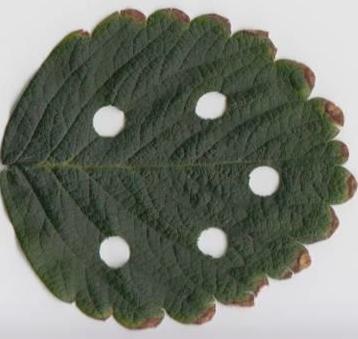 Sample leaf with mechanical wounding.Credit: Luis Cisneros-ZevallosOrganic farming in recent years has experienced continued growth and a higher demand among consumers. This has had a positive large-scale impact on the organic industry, farmers, and other industries related to organic produce, said Cisneros-Zevallos.

After several studies published in the past on post-harvest wounding stress effects on different crops, the team was inspired to apply this approach to leaf surfaces in the field that mimicked the attack of insects to the plant.

"This observation was key when we designed the strategies to be used in the study, that simple wounding stress on leaf surfaces elicited this systemic response with the unique observation of higher accumulation of phenolic antioxidants in fruit," Ibanez said.

"Our team has elucidated a controversy that was an open question for many years," Cisneros-Zevallos said. "Understanding how these antioxidants are produced by a simple stress like wounding can certainly transform the way the fresh produce industry operates, including both organic and conventional. And it may allow the industry to adopt novel tools based on pre-harvest stress to favor the accumulation of healthier antioxidants in fresh produce and processed foods."