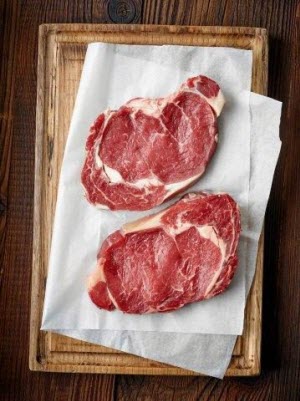 Butcher paper and other packaging materials could one day get a makeover with a virus-infused, “sugar glass” coating that could help food last longer.Photo Credit: MaraZe/Shutterstock.com With antibiotic resistance on the rise, bacterial contamination of food is becoming more problematic. Now in a study appearing in ACS Biomaterials Science & Engineering, scientists report that they have developed an antibacterial “sugar-glass” coating in which viruses that destroy bacteria are embedded and are kept stable for up to three months. The coating could someday be used in the food packaging and processing industries to help prevent food-borne illnesses and deaths.

Bacteriophages, also known as “phages,” are viruses that infect and kill bacteria. Unlike antibiotics, which act like sledgehammers, wiping out all bacteria, phages specifically target single strains of these germs, leaving beneficial microbes unharmed. For example, phages are useful for selectively decontaminating cheese—a food that relies heavily on the presence of beneficial bacteria for its flavor. Because phages are naturally found on fruits and vegetables and do not affect the odor, taste, safety or appearance of foods, scientists are investigating whether these “bacteria-eaters” could have an expanded role in promoting food safety. But incorporating phages into food packaging has been challenging. Drying them out so they can be added to various types of films can kill the viruses. Other methods for stabilizing phages are also problematic, requiring special handling or equipment. So, Carlos D.M. Filipe, M. Monsur Ali, and colleagues sought to find a simple way to stabilize and extend the shelf life of these viruses embedded in coatings used on food.

The researchers embedded phages into soluble “sugar glasses” or films made with pullulan, a polysaccharide used to prolong the shelf life of fruits and eggs; trehalose, a sugar used as stabilizing agent in freeze drying; or a combination of two substances. Then, they drop-cast or coated the mixtures onto butcher paper and allowed them to air dry overnight at room temperature. Phages embedded in pullulan or trehalose alone lost their antibacterial effects within one or two weeks. But those embedded within the combined pullulan-trehalose mixture could still infect bacteria such as Lysteria monocytogenes up to three months later. They conclude that the pullulan-trehalose combination had a synergistic effect on bacteriophage stability and is a promising, simple method for protecting food from bacterial contamination.

The authors acknowledge funding from the National Sciences and Engineering Council of Canada, Grand Challenges Canada, the Canadian Foundation for Innovation, and the Ministry of Research, Innovation and Science (Ontario).